Mankind has been terrified of rabbits since the beginning of time. This is why Elmer Fudd came into existence to save us all. Everyone knows this.

After all, if we weren’t scared of rabbits then why does the cinematic masterpiece Night Of The Lepus exist? Well?

I’m glad you asked, because I am hare to tell you. (Get it? Hare? It’s funny and you know it). 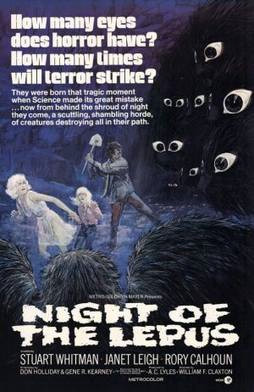 Jesus, this poster is so unintentionally comical, I know if I was old enough I absolutely would’ve gone to see it! Kinda Bugs me I didn’t see it back then (Get that one? “Bugs” as in Bugs Bunny? Did I have to explain that for you?).

Anyhow, the film opens with a stiff newscaster informing us of the spread of ravenous rabbits running out of food in the Southwest of the US, which obviously means man is their next menu item.

Rory Calhoun is a rancher who seeks the help of a college president played by DeForest Kelly (yes, “Bones” from Star Trek) to stop a bunch of bunnies because they are running amok since the coyotes in the area have been killed off, and therefore can’t be eatin’ dem there rabbits.

“Watership Down you sons a bitches! We remember!”

Because he’s a nice guy, Kelly asks for the assistance of researchers played by Stuart Whitman and Janet Leigh of Psycho and The Fog fame. The researchers agree because Kelly will not poison our bushy-tailed friends.

Kelly suggests using hormones to disrupt the rabbits’ breeding cycle and takes some rabbits for experimentation. One bunny is injected with a new serum believed to cause birth defects. A young girl is Leigh’s daughter played by Melanie Fullerton, and loves the injected rabbit, so she switches it with one from the control group. Of course she is then given the injected rabbit as a pet, but it soon escapes. The lepus has leaped! 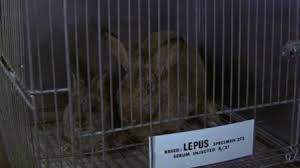 “Yeah, go ahead and inject us humans! When we get all giant, we’re gonna go lepus on your asses. The world will rain blood and carrots! Bwahahahah!”.

What’s next? Well, torching the rabbit holes of course! After that fun is over, our horrible actors stumble upon a large paw print which is deemed to be from an animal of at least 150 pounds!

One of the worst parts of the film has little Melanie accompanied by her friend (a boy dressed like a cowboy) who brings her to a mine to see his friend Captain Billy in his shack. Yeah, that doesn’t sound too perverted. Even better, Captain Billy’s little shack is empty, so naturally this pussy has the girl go look in the mine for Billy while he looks outside!

After hearing some noises, little Melanie sees a giant bunny covered in blood near a body! To say the least, it isn’t very convincing.

Then we have a truck driver pulling over for no reason in the dark shining his flashlight on the road. We hear growling bunnies and behind his back is a buck-toothed bunny ready for some Easter revenge! If you aren’t laughing at this scene, you’re just not trying.

And Pismo Beach was never the same…

The Cadbury carnage starts to build up as people with red acrylic paint (er, I mean blood!) are strewn along the highway and our resident black guy at the lab with a semi-cool fro informs us that “something of great strength” gnawed away at the locks on the truck from earlier (but wait-the guy OPENED the truck door himself! Whatever…).

Next up, a quack scientist looking like a rotund Dom Deluise (is there any other kind?) lets our worried people know that giant rabbits are responsible. So now it’s dyn-o-mite time to blow up 3 giant rabbit holes they have found.

“Our careers are down there somewhere!”

Meanwhile, Calhoun and another guy decide to go in the cave before detonation to take pictures? Yep-that’s right. All in the name of science. When they find the bunny breeding ground, it is beyond hilarious with stuffed rabbits and regular rabbits filmed to look huge over obvious miniatures inside the cave. Worse yet, some of them had “blood” on their faces which looked like cherry pie crust.

The scenes in the caves are so damn dark we can’t see shit (which is actually better), and the one bunny leaping in the air to attack is as menacing as an elderly crossing guard holding up a stop sign. Outside the cave, the useless extra with Janet Leigh gets attacked by a bunny while eating a sandwich (he knew the risks with lettuce in the air!) and it’s another hare-raising sight indeed.

The scene where the rabbits who survived the mineblast start to emerge is like watching slow-motion bunny mime. Not even the largest vial of crack could make ANYONE think this was scary!

When our litter of lepus attack a bunch of horses at night it’s just lame. And it mysteriously has the look of stock footage of rabbits being rabbits, and horses being scared of a guy waving a stick at them off camera. When the rabbits attack the horses and start eating them the only fear I felt was for the director who must’ve thought, “That’s a wrap! We’ve got the terror I was looking for. Drinks on me, everybody!”.

When the rabbits attack one of the selected morons in town, it looks like a stuffed animal being shaken violently. Even more pitiful is when they go stampeding towards a house which is obviously a dollhouse. The “grass” looks like that shit you find on a miniature golf course (maybe it’s because it’s on a miniature set? Am I on to something here?), and the rabbits truly look like rabbits searching for that elusive carrot being dangled in front of them.

So now, 4 idiots are trapped inside of the house in the basement and Calhoun and some other guy begin shooting at them through the floor boards (smart guys). The bunnies are basically just milling around and growling of course in the kitchen getting pegged off.

“Any better ideas? No? Alright then, let’s get down there and eat and shut your mouths everyone!”.

A few more comical deaths and fake blood and we’re just waiting for this torture to end. The National Guard gets called in to kick some furry ass, the acting gets worse and the screenplay downright abysmal. Here’s some great dialogue:

A police officer pulls up at a drive-in (guess the townspeople didn’t know giant killer rabbits were running amok and decided to catch a movie) and with a megaphone announces: “Attention! There is a herd of giant killer rabbits headed this way and we desperately need your help!”. Naturally, EVERYONE believes the officer and when he asks if everyone understood they all beep their horns in unison! I cannot make this up-I’m just not that clever!

By the way, what were they watching at the drive-in? A Tom & Jerry cartoon. Well, at least it wasn’t Bugs Bunny.

When Janet Leigh and the little girl get the RV they are driving in stuck in a hole in the road, it’s time to change the tire…as the lepus watch. It’s quite hilarious listening to bubbling noises, and crappy 70’s synthesizers as buck-toothed bunnies are supposed to be looking at the humans as though they were carrots.

“What’s up doc? Anyone know if the I-82 takes ya to Alberquerque?”

It gets worse! Leigh decides the best thing to do is send her daughter into the RV while she fights off hundreds off giant rabbits with flares! The scene goes on for an eternity as we hear the worst cries of anguish in cinematic history from the daughter: “Wait! Mommy! Oh no, Mommy!”. (Oh no, Mommy? Really?).

A helicopter with Calhoun lands and saves Leigh and the little one as we see embarrassing overhead shots of the RV model surrounded by a bunch of rabbits-just being rabbits.

Finally, it’s the showdown none of us were waiting for as the bloodthirsty bunnies march and hop their way to square off with the National Guard who have tanks, flamethrowers and guns and lots of townsfolk with their car headlights powered up-game on!

And the blood-drenched rabbit scared…no one.

Ah, but there is a trick up the humans’ sleeves-they have the railroad tracks wired up and the bunnies are gettin’ zapped! This goes on for far too long and it’s a damn shame the bunnies didn’t attack the inept director. 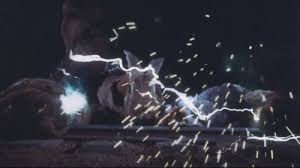 When some bunnies get past the tracks it’s clearly a guy in a rabbit costume jumping on people, but really who wouldn’t want that kick-ass job? I’d do it for free!

Crisis averted, it’s time for the final scene of tranquility as we see some dorks running through a field and the camera will zoom in on BUNNIES! NO! FOR THE LOVE OF GOD, NO! PLEASE TELL ME THE HORROR WON’T HAPPEN AGAIN!!! YOU WASCAWY WABBITS-BURN IN HELL!

Absolutely fucking abominable. This movie gives me great paws when I think of it. A tail too horrible to relive. If I had paid to see this (and if I was old enough, I probably would have), I’d lepus from the nearest cliff and meet my well-deserved demise.

God damn, Night Of The Lepus is putrid! You’d be more scared watching your mail get delivered.

1. Night Of The Lepus was also issued in some territories as Rabbits. Just as clever as the screenplay.

2. The film is based on a novel (no-it really is) called The Year Of The Angry Rabbit.

3. Night Of The Lepus would not appear on video until 2005. At least 3 people celebrated and 2 of them were rabbits.

4 out of 4 beagles for awfulness-this one’s a home run baby!

Q: Should you see Night Of The Lepus?

A: Good lord, no but enjoy my blog by all means.