By the late 1950’s, creature features had become fairly popular and because of that, a deluge of horrendous, pitiful low-budget flicks were coming out seemingly every week often filmed for pennies and looking like it!

And that’s where we arrive at with The Killer Shrews from 1959. This blog entry has been requested by my friend Nancy and it was a great/awful suggestion by her. She owes me big for suffering through it and now I will subject the public to it. 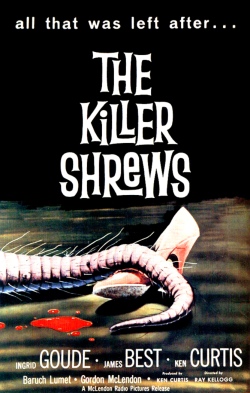 Not a bad poster really, but that’s pretty much where the entertainment stops, and thankfully The Killer Shrews is only 68 minutes long.

James Best plays Thorne Sherman a captain of a ship delivering supplies to a group on a remote island with a first mate known as Griswold. (Maybe he was the inspiration for National Lampoon’s Vacation)? Probably not-but certainly the inspiration for Rerun on What’s Happening!!.

Anyway, the group on the island is small and has a scientist known as Dr. Marlowe Cragis (that just sounds like a bad 50’s scientist name because it is).

Also there are his research assistant Radford Baines, the scientist’s daughter Ann, her fiancée Jerry Farrel, and a servant named Mario (I really think this was Mario’s first film before he succumbed to cocaine and hookers and went into the video game acting world in the 80’s). That you don’t (and won’t) care a damn about any of these stock characters is no surprise as these films were so poorly written it doesn’t matter.

The score sounds like it was for a bad game show and the audio sounds as though they shot the film in someone’s basement (which is rather possible). The shrew sound effects are a mix of an obscene phone caller, a paper bag being crumpled and a dog lapping up water.

The good doctor smokes a pipe and has a half-assed accent and his daughter keeps making googly-eyes at our hero Best who would go on to play Roscoe P. in the Dukes Of Hazzard TV series!

“Keep your handz off my daughter, but by all meanz please have another drink “.

The doctor works to make humans half-size. This is supposed to reduce
world hunger as smaller humans would eat less. Well, of course they would! What a brilliant idea!

Anyway, a storm hits the island and we first see (sort of) the killer shrews chasing Griswold up a tree as he cries for help. He literally pushes the tree down so we can see the shrews eat him but we can’t see a damn thing actually, and it really looks like wet dogs downing some stale Alpo.

And why are there killer shrews? Because the good doctor has created 250-300 of them accidentally and they’re getting hungry. They also happened to look like wet puppets in need of dental care.

The doctor’s explanation to Best is Scooby Doo-esque as he has tells us, they were mutants who “somehow” escaped and next thing you know they were multiplying. He tells us the shrews will only forage at night and they will get hungry to the point where they will eat one another. “It will only be 2 or 3 days” he states. Oh, Ok-thanks for that you idiot.

Most of the cast is drinking and one guy playing Jerry is drunk and doing perhaps the WORST drunk guy slurring his speech job in cinematic history. And Mario really looks like he’s from Super Mario Bros. and has some serious belly on him.

“So lemme get this straight-you say there’s mushrooms and you gotta jump over ’em? And why the hell do we need those coins again?”.

A particularly awful exchange of dialogue sees Thurman yelling at the doctor with Mario’s corpse lying there saying, “Well you certainly did a good job of it!” referencing the doctor’s abominations. The doctor fires back, “I’ve known that for some time captain!”.

Um, that sounds like you’re proud of yourself, not sorry you lunatic!

Turns out the shrews are poisonous and they have come from outside into the basement of the house.

Morning breaks and it’s time to get to the boat. It’s only when everyone is outside over the fence that someone finally notices Griswold probably didn’t fare so well out there all night. Thurman finds Griswold’s gun and his chewed up shirt and yells at one of the scientists, “They don’t leave much do they?”.

This line is said with such little conviction it looks as if Best the actor is about to laugh his ass off which is what anyone in the audience would be doing as well.

Thurman also gets in a fight with Drunk Guy who left him to die with the shrews when they were running and closed the gate on him. Thurman then kicks his ass after he hops over the fence and briefly considers throwing Drunk Guy to the poodles-I mean shrews, but thinks better of it. And, back inside more shrews get shot and killed. 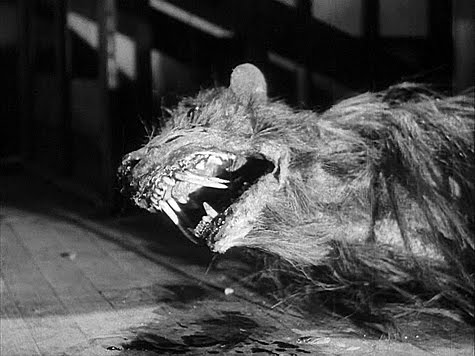 “You did me a favor. Screw those kids I’m leaving behind-all 250 of them! See ya later cruel world…suckers!”.

What to do after that? Have a drink of course! The doctor prefers coffee and Anne asks the cliché “cream or sugar?” before opening the door to a pissed off shrew who eats a scientist’s leg.

Drunk Guy gets bitch-slapped for crying (and deserved it) and it’s decided to tie oil barrels together to use as armor and walk to sea. Yep, that’s what they do. And never for even a millisecond do you think they are walking when the camera is supposed to be showing us these morons inside the barrels.

Oh, here’s a trailer for The Killer Shrews which accents how bad it is.

Meanwhile, Drunk Guy realizes parading around the roof with a rifle isn’t getting ‘er done so he hops off and runs for it and suffers what looks a severing licking from the shrews. I swear he’s enjoying it.

Ever wonder what dogs from a shelter with wet bath mats and mop heads strapped on them look like? Pretty fucking ridiculous I’d say!

S0 our idiots make it so sea and hop on the boat. The doctor tells us that soon there will only be one shrew and he will die of starvation. He then gives us a stupid commentary saying this is “an excellent example of over-population”. But Thurman is too busy sportin’ a 50’s boner for his Swedish hottie and states, “You know what doctor? I’m not gonna worry about over-population just yet” and finally gets a kiss seconds before this piece of crap ends.

That’s what I think anyway.

1. James Best really did go on to play Sheriff Rosco P. Coltrane on The Dukes Of Hazzard TV series from 1979-85.

2. Mystery Science Theater 3000 ripped this to shreds in Season 4.

3. This was a rare film that was a mostly regional release in the US that would also be issued overseas. The German release was called Die Nacht der unheimlichen Bestien. I thought you needed to know that.

4 beagles out of 4 for awfulness

Q: Should you see The Killer Shrews?

A: I think reading this blog on it is more than enough torture.