Let’s face it-kids are evil. And, in the early 1970’s it became obvious that film studios agreed. In 1973, The Exorcist scared the shit out of people (literally), and the following year we received It’s Alive from hack director/writer Larry Cohen. Love this TV ad that used to scare the poop out out of me!

Any film about a killer baby is pretty much worth watching and this was one of the first, if not the first. Demonic possession had become a hot seller by 1974 and has remained so ever since (although It’s Alive cleverly blames the drug industry and not Satan-though they are one and the same). So, when a Los Angeles couple named Frank Davis (played by John Ryan) and Lenore Davis (played by Sharon Farrell) have their second child, some rather unusual complications from the birth the fun begins. The hospital staff seemed unprepared for the fanged, clawed baby! Poor planning I say. Underpaid staffs never work out.

The demon baby escapes through a skylight and proceeds to wreak havoc on Los Angeles as any demon baby would. Doctors, nurses, street musicians (they should perish) and even the milkman will all be part of the feeding frenzy. This is not the milkman, but it is a guy getting killed by the demon baby, so enjoy it. 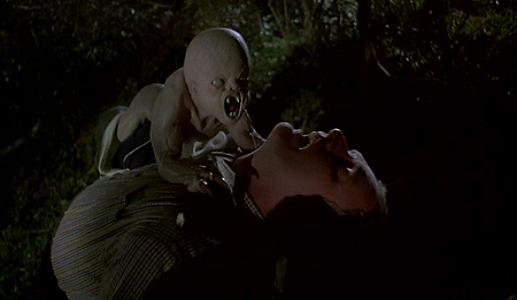 The media go nuts with the story and the family are treated like freaks. Eventually, the father starts seeing himself as a Dr. Frankenstein-type who has created a monster in his son and joins the police and media in the manhunt (or babyhunt as it were). We eventually discover that the doctor who has been taking care of the wife had been prescribing her drugs that an executive from the drug company has informed him has caused the genetic monstrosity that is our lovely baby. Naturally, the drug company wants the baby extinguished.

“I am demon spawn-love me! I may bite your nipples really hard though, Mom!”.

After killing off a cop, the baby finds his way back home and bonds with Mommy who hides him in the basement where her husband finds it. Frank (the husband) then decides to shoot the baby despite his wife’s pleas, but the older brother is protecting his little bro’. Frank orders the elder brother (Chris is his name) to move away but Chris says he will protect his brother. Frank shoots at the baby anyway and hits it, but the baby will kill Chris’s friend Charley, who just arrived with bad timing by biting him in the neck which is awesome and fun to watch!

Like any baby, our hellish spawn knows he’s done wrong and flees without a spanking might I add. The child is found in the complex sewer systems of Los Angeles and the police feel they have trapped him and they contact the father, Frank.  For whatever reason Frank is allowed to join the police in the sewers with a rifle and he finds the beast. When Frank sees the creep, he suddenly is overcome with feeling for the child and picks up the wounded monster and decides maybe there is a future for he and his child playing baseball-even if his son will most likely eat the other kids.

So now Frank has realized freakish demon baby or not, he wants to be a father (at least buying a Halloween costume each year will not be necessary). He tries to escape through the sewer system but the police are waiting. Frank will then plead with the doctors and police to just simply study his son and not kill him.

The evil fertility doctor screams for the police to just open fire and kill them both, but the baby leaps out of Frank’s arms and gets in some dinner by eating the doctor’s neck (it ain’t breast feeding, but it’s something!). The cops will then open fire killing both baby and doctor (not that the doc had much longer). Frank and wife (she was there for all the fun too) are devastated as they are taken back home in the police car (what, no charges pressed?).

An ominous call comes in the car from police headquarters stating another baby has been born in Seattle. End scene! More demon babies? Hell yeah! 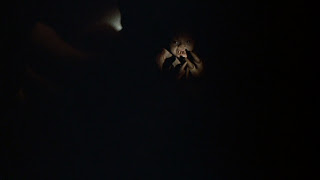 “Blaggghh! Seahawks front row tickets or all of Seattle will perish!”

I have to say-I have a soft spot for It’s Alive because it is well-conceived. The movie took some risks by addressing actual issues of parenting a deformed child and the drug companies avoiding the whole Lucifer’s spawn cliché.  The movie is also fairly tense at times and the idea that it’s a baby is downright creepy and chilling.

The Oscar-winning Bernard Herrmann did a fantastic, moody score and both Ryan and Farrell are very good and sympathetic in the roles of the parents. The effects by Rick Baker (who of course became one of the top effects guys in Hollywood and did the work on Star Wars, An American Werewolf In London, Men In Black and so many more) are rather cool-the baby puppet is creepy and not seen very well until a full reveal at the end. Seeing the film at times through the baby’s (double vision) view adds terror to it. Watching the little guy stalk his prey (especially the milkman) is both hilarious and eerie. Plus, he’s really frickin’ bald.

“Fang you very much!”

The sound effects are very well done also as we only really hear the Satanic gurgles and cries and catch fleeting glimpses of the claws, head, eyes and fangs of the evil one. So yes, It’s Alive is a pretty cool flick. However, in the hands of Larry Cohen it comes off as hackneyed and amateurish at times and the pacing is sluggish here and there. Some of the acting and direction is more wooden than Elton John at a nude RuPaul poetry slam.

As far as 70’s horror flicks, go It’s Alive is pretty damn cool. Two sequels would follow in the pretty good It Lives Again (1978-with three babies which are much better than one! I will review this one in the future) and 1987’s laughable It’s Alive III: Island Of The Alive.

1. It’s Alive was a cult success at the box office grossing over $7 million and thus sequels followed.

2. The score was provided by the Oscar-winning Bernard Herrmann who did many scores for Alfred Hitchcock.

3. It’s Alive was remade in 2008 starring a clearly desperate Bijou Phillips. It is a piece of crap and went straight to video.

Q: Should you see It’s Alive?

A: Are YOU alive? Then yes! Especially if you have a demonic child-and really, is there any other kind?