Did the world truly need a movie about monsters from the sea that were mutations caused by a local cannery in a sea town that decided to use a growth hormone on salmon, and then those very salmon ended up in the ocean due to a storm and were eaten by fish who then became “humanoids” and came to shore and started banging big-boobed women?

Humanoids From The Deep is a dreadful film and that’s why you should watch it. Well, that and the boobs. There’s lots of boobs and they bounce as boobs should. Aside from the stupid “plot” involving the cannery and their growth hormone-infused salmon there’s not much story to tell.

People get eaten by the humanoids who are most certainly ass-ugly.

Ugly as they may be, the humanoids know how to have a good time and that means attacking women with bouncing breasts and impregnating them with their humanoid seed.

Basically, we have the humanoids and the humans. The humanoids want our women. They don’t want the men because apparently humanoids don’t swing that way, but they certainly don’t mind killing the men in gruesome ways to get to the women. Which makes sense really. And it’s worth noting that the humanoids do not seem to enjoy foreplay as they pretty much get to the point of their journey from the deep. They rip off the clothes (what few there were to begin with) and then get to business.

What is particularly comical is that this piece of trash was directed by one Barbara Peeters (real name Barbara Peters-that extra “e” really fooled us Babs!) who obviously is a woman. So why would she have such exploitative crap in her movie? Well, she didn’t actually. Feeling the film needed that extra little something (like sea monsters raping women in the sand) executive producer Roger Corman had second unit director James Sbardellati add all the nudity, gore and sex scenes. Below is a dog who met his humanoid match. The seaweed is a nice touch.

When she saw the final cut of the film, Peters wanted her name removed from the credits, but no dice (perhaps the extra “e” in Peeters was her best offer?). Could Ms. Peters not see the genius in a pageant winner in her crown fighting off a humanoid and smashing his head in with a rock as she’s topless? 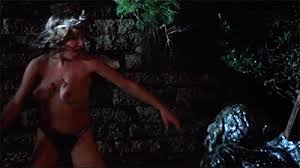 Without a doubt, the best scene is a mixture of the bizarre, pathetic and nude! For some unknown reason a tool thinks using his weak ventriloquist skills will get him laid in a tent by a cutie with big knockers. I mean, does this look like it would work and give anyone but the dummy wood?

Well, what the hell do I know because it works as you will see below because he’s got a naked bosome blessed chick ready and willing.

To me, this is cinematic genius. But watching her flop around as the creature mounts her is more comical than disturbing. Plus, we do not see any humanoid dingus, so it passes by without too much harm-just some awkward flopping around in the sand. Oh-and amazingly night has become day due to crappy budget.

Of course the humanoids don’t always win. Here, we see one getting stabbed which doesn’t deter it too much.

And the humanoids get shot at and harpooned too which I guess they deserve for planting their seeds in our women.

We eventually reach the climatic scene at the amusement pier which leads to lots of carnage and gore and that hilarious battle with the topless pageant queen. Some humanoids are smarter than others and actually come up from under the pier!

Other humanoids just swim on up and get what they can-and really, isn’t that what you want from a humanoid? In addition to awesome acting chops you have to applaud a decisive humanoid. Because as we all were taught in school-a timid humanoid is a bad humanoid.

And what would this movie be without the infamous “birth” scene? Gee, did the producers maybe see the masterpiece Alien the year before and decide to rip that off? Let’s just say yes, laugh, and move on.

“Love me for I am no different than any other child! Well, maybe I am a little bit…”.

So, once you’ve endured Humanoids From The Deep should you feel shame? Yes. But, not as much shame as actors like Vic Morrow (also in the pitiful joke Great White elsewhere on my blog) and Doug McClure (inspiration to Troy McClure on The Simpsons?) should’ve felt. But hey, this is quality trash cinema and how can I really blame them?

1. Humanoids From The Deep grossed a lame $2.5 million at the box office, but that’s far more than it cost to make.

2. The fellow who did the score to this debacle of the sea was none other than James Horner who would win an Oscar for Titanic!

3. Gale Anne Hurd was a production assistant on this travesty but would later produce films such as The Terminator, Aliens and The Abyss all directed by her then-husband James Cameron! She now produces AMC’s The Walking Dead.

4. Makeup artist Rob Bottin did the humanoid creatures and he would later work on films like The Fog and John Carpenter’s The Thing and is awesome at what he does.

Q: Should you see Humanoids From The Deep?

A: If you like boobs and sea monsters gettin’ some, then yes. Otherwise, go for a walk or eat some ham.