It is time for another tale of a sea creature gone amok, and that tale is Orca: The Killer Whale. Released in the summer of 1977 (the same time as Tentacles!), this film was produced by big-time producer Dino DeLaurentiis and released by major studio Paramount Pictures and was directed by Michael Anderson. Obviously, it was another cash-in on Jaws but this film actually took a few different twists and turns and added some interesting touches. That’s not to say it was genius or original-it wasn’t either of those things, but Orca has some qualities to it.

I have the very same poster above at home-once again thanks to my Dad, who worked at a film distributor back then. It’s a cool poster and the scene on it certainly did NOT occur in the film itself, but sure as shit made we want to see it! And see it we did at a movie theater down the shore on the boardwalk and I swore that Orca was gonna come up and eat me as we walked out.

There are lots of scenes (wayyy too many in fact) of Orca and family swimming along to a cheesy score by the legendary Ennio Morricone. Most of this footage is either stock footage or shot at an aquarium in San Francisco and is beyond boring and corny.

The esteemed Oscar-nominated actor Richard Harris plays one Captain Nolan who is an Irish/Canadian that captures various marine animals to pay off the mortgage on his boat (named The Bumpo) so he can go back to Ireland. Initially looking for a great white shark (there’s an original idea!), Harris and his crew see a killer whale pummel the shark they’ve found into submission and death after the shark nearly killed a crew member in the water. Harris now wants the whale to be captured seeing big dollars in his head.

Things go horribly awry when Harris harpoons a female whale (pregnant no less) who is instantly in agony. It’s a horrifying scene and the viewer instantly roots against man from here on in. Prior to this we had been shown shots of the whole family doing their thing happily rockin’ the waves to the effectively cheesy Morricone score. Papa is beside himself and it will get worse for him. Harris tries to reel the female in anyway, still thinking only of the money and she will try to off herself in the propeller blades of the boat. That only makes things worse and they pull her on board letting her dangle as she is dying.

Even more awful-she has a miscarriage on the boat and the fetus hits the deck. Under orders from Harris the crew will then coldly hose the fetus to the edge of the boat where it falls into the water. To say papa Orca had a bad day is an understatement. It’s a rather disturbing scene and if you have something resembling a heart you want as much revenge as Orca!

Warning: Stillborn whale fetus should not be hosed into the ocean and piss off its’ Dad who is Orca.

Realizing that the dead whale is of no use, they cut the female loose and dumpo her ass from the Bumpo into the sea as well. Orca cries in anguish, but he will jump up and eat a crew member at this point (played by the same old dude Keenan Wynn who got mangled and killed the following year in Piranha). In another scene that makes my sorry ass weep, Orca will push his dead mate all the way to the shore. By this point the audience is clearly saying, “hey whale-kick that human’s sorry ass!”.

Back at the fishing village, Harris isn’t very popular because Orca begins wreaking havoc on the community and the fish start to migrate (or get the hell out of there-however you want to look at it), which means no money for the fishermen. The fishermen tell Harris to go ahead and kill the whale figuring if he succeeds the fish will be back, and if not, he’ll get eaten. It’s a win-win!

Charlotte Rampling who plays a marine biologist or something (and looks quite fetching I must say) enters the film and here looks like a James Bond chick rather than a marine biologist. She doesn’t get naked in Orca but like any fine British actress she gets nuded up in other films for “art’s sake”!

She tells Harris he’s done something truly awful which he does acknowledge and then even offers sympathy for Orca, because he reveals that his wife and unborn child had been killed by a drunk driver years ago. Ouch. Harris promises not to hunt Orca, but the whale proceeds to destroy fishing boats and blows up gas lines (quite a clever whale he is), and then bashes the shit out of Harris’s house which must’ve been built by inbred fish-people because it looks like it’s being held up by several toothpicks above the water.

Orca continues to go bonkers and eats Bo Derek’s leg off (she’s also a part of the crew) which takes her down a few notches from a perfect “10” to about a “6” ha ha. Here’s the before and after of Bo. And by the way, it’s her broken leg that Orca eats so he’s really doing her a favor if you think about it.

“Holy shit guys I did it! I got Bo Derek’s leg! The tuna’s on me tonight-woot!”.

This leads to the ultimate showdown w/ Harris and what is left of his crew including a guy named Paul and Ken (played by Robert Carradine) go off to hunt Orca. Rampling joins in as does a Native American played by Will Sampson who decides to bring his guidance and some ham (I made up the part about the ham, but I’d have brought some). Paul doesn’t last long as Orca decides to have some McDonald’s McPeopleBites.

“This is what ya get for those horrid McFish Bites! There are an insult to my brothers and you shall pay you fool!”.

Orca takes them on a wild-goose chase to what looks like the Arctic Circle but I’m not sure where it’s supposed to be exactly. Just know this-it’s damn far and there’s lots of icebergs that look like styrofoam. Apparently the finale was shot in Malta and you can see if you look at the backgrounds that it’s not exactly Greenland and looks like summer.

Later on, Carradine leans over the edge of the boat at one point for no good reason and Orca chomps his sorry ass to lessen the people count. Orca leads our cast to the icy finale and that Paul dude gets in a lifeboat which becomes a deathboat as Orca knocks him out and drowns him in the frigid waters. After a lousy night of freezing and still being in the movie, our 3 survivors awaken an Orca shoves an iceberg into the Bumpo which starts to sink the boat. Sampson gets crushed by falling ice and snow from the iceberg and meets his demise while Harris and Rampling escape from the collapsing boat and Harris has harpooned Orca.

Harris and Rampling are on separate icebergs and Orca divides the two far apart. Orca brings Harris oh so close for snack time and lets him freeze a bit, before swimming away and toying with him like any demented whale done wrong would do.

In an amazing show of athletic skill, Orca will return to slide Harris down a giant shard of ice towards him and uses his tail to flip Harris off the ice and smack him in the air into an iceberg nearby which kills our villain of the seas. Harris’s lifeless body slides into an icy grave in the shape of a cross seemingly (how eerie!).

“Come to me my human puppet, your time is near! That styrofoam can’t hold you forever you son of a bitch!”.

His work done, Orca swims away under the icebergs South and it’s not clear if he’s committing suicide or heading a long way back. Rampling looks up and sees a helicopter arriving to save her as someone had conveniently radioed in before this all went down. Final score: Whale 6, Human 2.

What is interesting about Orca is that Harris actually has sympathy and understanding for the whale who has lost his family just as Harris had as well. Harris actually has some sort of admiration for Orca for kicking ass where Harris simply fell into depression after the drunk driver killed his own loved ones. Of course it is Harris who fucked up Orca’s life and must now pay for his sins, but one gets the impression Harris doesn’t care because his life has been a disaster and he’s ready to leave this world even if it means Orca is going to mess him up pretty badly.

As Orca swims off (again it’s not clear if he’s also meeting his fate or going back to high-five his whale pals), a ghastly song plays with female operatic vocals by singer Carol Conner. To be honest, I’d rather hear a drunken song sung by Carroll O’Connor (that’s Archie Bunker to you) because it’s fucking dreadful and laughable! 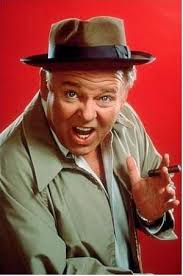 I have to say, I’m one of those that will defend Orca as a decent film and I applaud any movie where the creature gets a chance for revenge. Orca has far too many scenes of the whales jumping out of the water and spouting off bad dialogue (or sonar as it were), and it’s certainly got some hammy moments. All in all though, it has some harrowing scenes with a strong cast, the whales look quite good and there’s a doozy of an ending. Plus, we now have an orca on the logo of the NHL’s Vancouver Canucks and I’d like to think it’s a tribute to Orca.

So what’s wrong with that?

Orca supposedly cost around $6 million to make and though it was listed as a bomb, it still made $14.7 million. So there.

2. Two different whales starred as Orca and their names were Yaka and Nepo. Neither would go on to play Free Willy.

3. Orca was filmed in Newfoundland, Canada during fishing season.

4. Richard Harris nearly bit the dust insisting on doing his own scenes in Malta during the iceberg finale.

Q: Should you see Orca?

A: Yes-but not with your mate!